A grey, overcast and very rainy Silverstone was to provide the location for the last outing of Williams Touring Car Engineering. Not the sunny send-off the team might have hoped for either on or off the track.

Despite the weather the team were in jovial mood and raised a Skull and Crossbones flag high up above the team motorhome. There was free flowing coffee from the Nescafe Blend 37 tent, plenty of posters and stickers to give away and the merchandise was still on sale (at full price!).

Both cars appeared with the usual “Renault” signage replaced with the legend “Au Revior” but beyond this on track there was little to smile about. Plato had qualified well for the first, sprint, race and perhaps couldn’t believe his luck when Laurent Aiello did one lap too many on his way to the grid and was sent to the back. 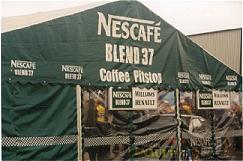 To complete his joy David Leslie elected to stay in the pits to leave his tyre choice as late as possible. With both the Nissans out of the way this left JP on pole! The joy, however, was short-lived. As the green flag went down for the cars to start the parade lap Plato was left standing on the grid his engine unable to be started.

With all cars gone the number 5 car was slowly pushed back into the pits. The problem was not rectified soon enough and by the time Plato had left the pits the others were long gone. Four laps later the Laguna made its way slowly into the pits to retire with engine problems.

The second Williams of Jean-Christophe Boullion had started much further down the grid and made little progress or impression on a race that was eventually stopped by the rain. At this point no-one knew that Boullions eighth place was to be the last time a Williams Touring Car finished a race, let alone scored any points.

The starting positions of the Williams pair for the second and final Touring Car race of the day were virtually reversed, Plato was back in 10th and Boullion 3rd. If Boullion was ever going to put on a show in the final race it never showed, the Frenchman was totally upstaged by his team-mate who made a storming start to end the first lap 3rd! 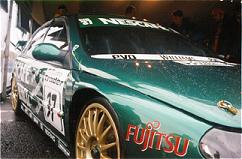 JCB’s final race for Williams was over before the first lap was complete after a bump with Kox put both men out. Plato meanwhile was all over the back of Leslie’s Nissan and having made up so many place the was no was that a Primera was going to get in the way of JP making up another place.

Fed up of waiting Plato gives Leslie’s Nissan a gentle nudge and passes through for 2nd place. While Plato had been dealing with Leslie this had allowed Rydell to build up a sizeable lead. No matter with the pit stops still to go all this could still change.

Plato pitted early for his stop and stormed out of the pits back in hot pursuit of Rydell’s Volvo. It was this eagerness to get on with the attack that was to prove Plato’s final undoing. A further trip to the pits would be required – this time at a slower pace without stopping as a penalty for exceeding the pit lane speed limit the last time he was there.

If this final stop undoubtedly put paid to any ideas that Plato might have about winning the race Alain Menu made it absolutely certain. Menu, Williams Renault’s only Touring Car champion, strayed off the track and into the gravel. On returning to the tarmac Menu seemed to be oblivious to the fact that there might just be someone else already there – in this case Plato. The Mondeo hit the passenger door of the Laguna with some force.

Initially Plato was able to carry on but, like some old clockwork toy, the energy seemed to slowly unwind from the Laguna and after a few more laps Plato brought the car slowly back up the pit lane. The final insult was that the car couldn’t make it all the way to the garage. Just beyond the white line marking the beginning of the pits the car came to a halt. A group of yellow team members ran to the rescue pushing the car into the garage never to be seen again.