The Rover Metro 6R4 is Williams’ one significant foray into the world of specialised sub-contracting.

Williams were approached in 1980 with a brief to produce a competitive rally car for Rover and, as the future of the F1 business seemed clouded with political uncertainty at the time, an arrangement of this nature seemed a shrewd way of hedging their bets.

Patrick Head recalls: ‘It is clearly very difficult to do F1 on a full-time basis and get involved in any detail with another project in a different area, but I suppose we took on the Metro project through force of circumstances. Rover’s competitions boss John Davenport asked us whether we could shoe-horn a Rover V6 engine – which was literally the 3.5 litre V8 with two cylinders chopped off – into the front of a Metro.”

Williams GPE agreed to look at the project and soon it became quite clear that, to get the engine in, the driver would virtually have to sit in the back seat. Their team driver Tony Pond came down, tried it for size and immediately said “there’s no way I could drive this thing quickly through a forest stage – I can’t see the front end from where I’d be sitting.” Clearly, we had to think again.’

At about this time the four-wheel-drive Audi Quattro was about to burst on to the international rallying scene and Patrick, who had briefly worked with British 4WD pioneer Harry Ferguson Research many years before, reckoned this way the way to go.

‘So we turned the whole thing round with the engine at the back, the gearbox ahead of it with driver to both the front and rear wheels,’ Patrick continues. ‘We presented the concept to Rover and they said “This is great”, pushed the “go” button and off we went with the project. We finished it in about a year, delivered three prototypes to Rover in about November 1981 – six months’ development with Williams’s assistance.’ 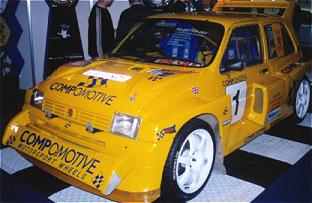 The Rover competitions department eventually managed to persuade their board that they should launch a serious rallying programme, by which time they realised that this little V6 developed a wholly inadequate 220bhp or thereabouts. They ten faced the challenge of sitting down and developing a new engine, a more powerful 3-litre V6, before concentrating on how to produce 200 of these machines to conform to the international Group B rallying regulations. In the meantime, changes in tyre dimensions meant that bigger wheel sizes than originally envisaged had to be incorporated into the design, giving the eventual Metro 6R4, as the car was designated, an ‘up-on-stilts’ outward appearance.

Today, visitors to the Williams Conference Centre and Grand Prix collection are able to see a Metro 6R4 on the mezzanine display level. All lumps and slats, humps and spoilers, it represents a curious strand of production car engineering far removed from the sleek, wind-cheating profiles of the Grand Prix cars below which demonstrate the true height of the Williams team’s heritage.

The whole Metro 6R4 project was a novel diversion, an interesting technical challenge at a time when the company’s capacity for innovative engineering briefly looked as though it would need to focus in new directions on a long-term basis.

Steve Soper has the dubious honour of being the one who pranged the first and, at that stage, only Metro 6R4. Stepping in for regular test driver Tony Pond one day in 1983, Steve took to Chalgrove airfield near Oxford in the car in front of assorted high filers from Williams and Rover. ‘There was this big puddle, which I’d been avoiding all day. On one lap with Williams engineer John Piper I hit the puddle and we left the road at high speed, went into a hole and tipped over. Well it tipped over several times, shedding wheels and bits of suspension on the way. I had to go and tell my boss, John Davenport, that I’d just destroyed his one and only £1 million car but he was out to lunch so I washed the wreck in the hope that it would look better. It didn’t. JD was very good, He just said “it’s only a car.” I thought I was going to get the sack.’