Blog Moving the Factory from Didcot to Grove

Moving the Factory from Didcot to Grove

Williams Grand Prix Engineering had been based in Didcot, Oxfordshire since their inception in 1977 firstly on Station Road and then to under the cooling towers of Didcot Power Station. By 1994 they had outgrown that site and the search was on for new premises.

Williams needed somewhere with room to grow and close to the existing site so that staff could be retained. In the end the site of the former Jansen pharmaceutical UK HQ was chosen in nearby Grove.

However, moving several hundred people and all the team’s equipment whilst also in the middle of an F1 season is no easy task. In particular moving the 165 tonne wind tunnel was logistically challenging having to be transported in several parts and required a major road to be shut to allow it to be transported. Even once it was at the Grove site it was another two months before it was operational again.

On Sunday 28th April 1996 the 13 parts of the wind tunnel along with two miles of cabling were taken from Didcot to Grove along a major dual carriageway before hitting the back roads. The large size of some of the pieces meant that they were too big to pass under one bridge and needed the electricity turning off and cables raised in order to pass under them. As reported in the local press at the time (click on the image for larger view). 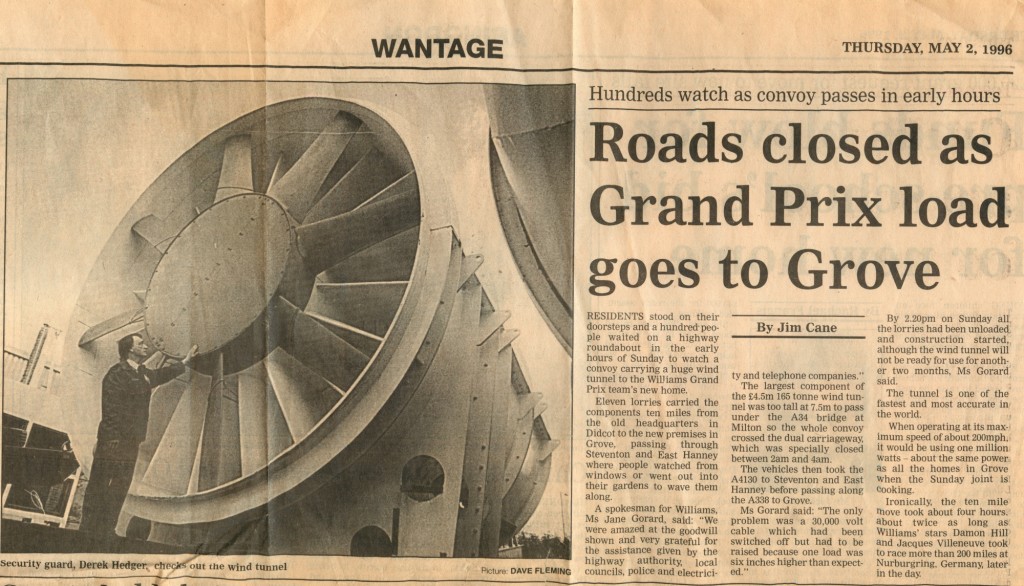 The factory was officially opened by the Princess Royal on Wednesday, October 20th 1996 some six months after the wind tunnel has made its way across Oxfordshire to the new home in Grove. 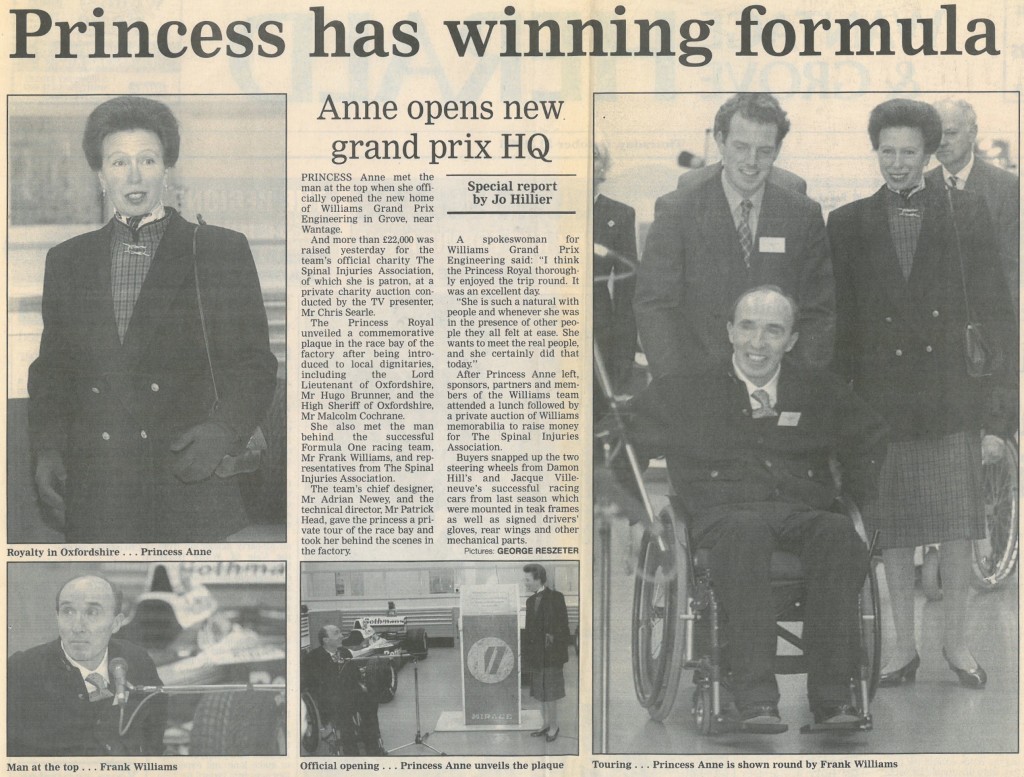 A real measure of the success of the move off track though is that all of this was undertaken without affecting performance on-track. 1996 was, of course, Damon Hill’s championship winning year.

Below is an original press release regarding the move from the time signed by Hill. The full text of which appears below.

Williams Grand Prix Engineering Ltd has moved to a substantial new site at Grove, near Wantage in Oxfordshire, UK.
With all options for expansion at Didcot implemented, the team needed to move to larger premises capable of housing the latest technology. A major consideration was location. Having built up a work force of highly skilled and loyal people, many of whom live close to the factory, relocation was to be kept to a minimum. The 28 acre site at Grove, previously owned by Janssen Pharmaceutical Ltd and only 15 kilometres from the Didcot site, was the solution.

Planning for the move started in January 1995 in advance of the official launch date, December 4th 1995. The process was complex, moving the entire facility including machine shops, composites facilities, electronics, design, research and development, the conference centre and of course the race and test team as well as the support functions. The important criteria was to ensure that the 1995 race programme and the design and manufacture of the 1996 Rothmans Williams Renault FW18 championship challenger were unaffected. Particular areas that were crucial to the relocation were the moving of the large autoclaves used for composites manufacture and the heart of design and development, he computer aided design system.

An even bigger challenge was the moving of the 165 tonne half scale model wind tunnel, acknowledged to be one of the most accurate and fastest of its kind in the world. The tunnel contains over 5 miles of cabling and was required to be cut up into 13 pieces to enable transportation to Grove. Local roads were closed during the early hours of April 28th when the eleven strong convoy of HGVs made the journey from Didcot to Grove.

The move for the team was probably one of the biggest projects it had ever undertaken. The approach was no different to any other challenge presented to the team. “Who are the experts and can we persuade them to assist us with the project?”. International management consultants, Andersen Consulting, were already discussing sponsorship opportunities with the team and it soon became clear that the company’s expertise would fit the brief perfectly. They were to become partners of the Rothmans Williams Renault team early in 1995. A team of four personnel became an integral part of Williams, providing expertise to undertake the complex relocation on time, within budget and without any significant disruption to the development and build programme of the 1996 Rothmans Williams Renault FW18 car.

Williams general manager, David Williams, worked closely with the Andersen Consulting team to co-ordinate the move. “Having worked for Williams Grand Prix for over 8 years, I know by now that every season brings its new challenges. I have to say that this was rather a unique one and called for expert assistance”, he commented. “Working closely with Andersen Consulting, we drew together a team of top consultants who collectively assisted us in what was a very smooth transformation. All logistics, planning and new factory layout were handled by them. R & J Consultants of Bristol was appointed as architects and civil engineers and building programme managers. A formidable team at times, but one that got the job done to very tight deadlines.”

Having undertaken this major relocation, it was a good time for the factory to undergo a major re-organisation. Over the years, technology had moved on but it was difficult for the bricks and mortar to keep up. A major redesign of the factory layout was undertaken and now every department is specifically sited in order to ensure a more effective production path. Investment has been focused on the environment within which the factory operates combining new machinery and hi-tech works alongside traditional engineering skills as effectively as ever.

There is only one way success manifests itself with the 230 personnel at Williams and that is to win races. 1996 was a Championship winning year for the team. Damon and Jacques took the Drivers’ Championship to the wire in Japan, with Damon needing just one point to win the elusive title. He did this in style by leading the race from start to finish. And as a team, Rothmans Williams Renault Secured the FIA Formula One World Constructors’ Championship in Hungary with four races still remaining in the season. This was the eighth Constructors’ title for the team, equalling Ferrari’s record. Everyone involved with the relocation project should feel part of a winning combination.