The following is just a very small selection of Williams related books and videos. Some of these are current and others will have been out-of-print for some years. The rating will give you some idea of whether it is worth searching out a copy.

If you want to order any of the books shown here you can do so through Amazon. Simply click the icon and follow the instructions. Alternatively try abebooks who specialise in out of print books. 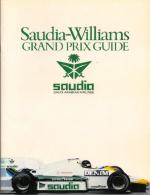 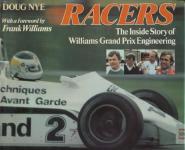 Doug Nye worked closely with Frank Williams, his Didcot team, and many friends and supporters, to produce a detailed account not only of one man’s life in racing but also of the day-to-day working of the team. It includes extensive profiles of Patrick Head, the designer of the championship winning car, and of drivers Alan Jones, Clay Regazzoni and Carlos Reutemann. 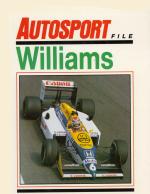 Autosport File – Williams (Various)
A comprehensive review of the team from the motorsport bible Autosport. Includes:

Pole Position – The inside story of Williams-Renault (Jon Nicholson)

This remarkable book enjoys unique access to one of the world’s most successful Formula One teams and affords a rare insight into the workings of a major player in the multi-million pound business. It reveals the personalities working quietly behind the scenes: the engineers, the truck drivers, the fuel experts, the sponsors, the caterers, the mechanics and the unsung heros.
Pan 1996 ISBN 0-330-34649-0

Alan Henry tells the inside story of the supreme Wantage-based operation, from 1969 when Frank Williams entered F1, right up to the 1998 driver pairing of reigning World Champion Jacques Villeneuve and Heinz-Harald Frentzen.

Williams 1969 – 1998 Photo Album (Peter Nygaard)
Today, Williams Grand Prix Engineering is one of the most successful teams in Grand Prix racing, but is was not always this way. The team used to be the underdog of Formula One. It took several years to move the team from the back of the grid to winner of several world championship titles. This book shows the story of Williams Grand Prix Engineering through fascinating photos of ALL the Williams models, from the back-of-the-grid and very basic cars to the world championship winners of modern times. See photographs of the most famous Williams drivers like Alan Jones, Nelson Piquet, Nigel Mansell, Alain Prost, Ayrton Senna and Jacques Villeneuve.
Iconografix 1999 ISBN 1-58388-000-3

Williams Renault has experienced over the past three seasons every emotion in the book – from the thrill of winning the 1992 and 1993 World Championships with Nigel Mansell and Alain Prost, through the tragedy of Ayrton Senna’s death in 1994. Written by a top motorsport author, here is a fascinating behind-the scenes study of life in this top Formula 1 team and the extremes of tragedy and triumph it has experienced.

Williams, The Business of Grand Prix Racing (Alan Henry)
This book is more than a story of one man’s resolute determination to achieve an ambition. Using Williams Grand Prix Engineering as its vehicle, it is the story of how Grand Prix racing has been transformed over the past 20 years from a specialist sport into a multi-million pound business of considerable complexity.

Canon Williams Magazine (Issue 2) (Various)
A shortlived series of magazines available at newsagents in the UK during 1993. This issue included:

Alain Prost (Christopher Hilton)
This biography builds up a detailed picture of the man by speaking to a wide range of people who have been close to him, those who knew him in childhood and his early karting days to those who worked with him. 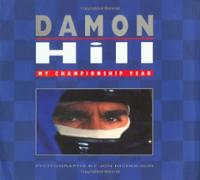 Damon Hill – Grand Prix Year (Damon Hill & Jon Nicholson)
This is a first-hand insight into the life of a Formula One driver both on the track and off. More than an account of Damon Hill’s 1994 season, this is also an in-depth study of the Formula One driver’s world, from the soles of his flame-proof boots to the heady feelings which come with success in this most dangerous and dramatic of sports. In it, Hill recalls the days when his father, Graham, a double world champion, made motor racing an integral part of family life.
Macmillan 1994 ISBN 0-333-62308-8 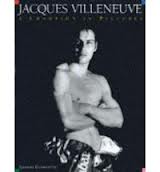 Jacques Villeneuve – A Champion in Pictures (Gianni Giansanti)
Italian photographer Gianni Giansanti has spent many an hour with Jacques Villeneuve, from the moment the Canadian first tested an F1 car at Estoril in 1995 to winning the world title at Jerez last year. And it shows. In a vivid illustration proving that a picture does indeed tell a thousand words, this coffee table work is light on copy but full of images never before published.

Nigel Mansell – My Autobiography (Nigel Mansell)
Nigel Mansell is one of motor racing’s all time greats. An ordinary bloke who took on the best and most ruthless drivers in the world’s most glamorous sport and won; the epitome of speed, daring and sheer bloody determination. An absorbing account of one man’s rollercoaster ride to the top.
CollinsWillow 1995 ISBN 0583 32306 5

A Different Kind of Life (Virginia Williams with Pamela Cockerill)
An extremely moving book telling the Williams story from the point of view of Frank Williams’ wife. The story covers both the good times and the bad right up until after Frank Williams’ crash. This book has long been out of print and is much sought after – track it down.
Doubleday 1991 ISBN 0-385-40129-9

Frank Williams (Maurice Hamilton)
Williams’ team and driver successes are without parallel but the man himself remains an enigma. His unchanging expression imparts no emotion. Maurice Hamilton lifts the lid on one of F1’s most enduring talents. Frank’s story is essentially one of fortitude and the triumph of human spirit.
Macmillian 1999 ISBN 0-333-717156-3

Alain Menu’s Williams Renault Championship Year (Darren Styles and Simon North)
The only book, to our knowledge, that has been published about a British Touring Car Team.
Brooklands Publishing 1996 ISBN 0 9529684 0 2

The Pits (Jim Bamber)
Jim Bamber is motorsports top cartoonist with his work featuring regularly in Autosport, Rallysport and Car & Car Conversion magazines. The Pits is his yearly collection of cartoons. Also, why not visit Jim’s site www.jimbamber.co.uk, a sister site to The Williams Database.
Haymarket 1999 ISBN 0 8602493 4 4