Formula 1 Princess and the world of Formula One aid fundraising

Princess and the world of Formula One aid fundraising

Princess Anne met the man who runs a world-beating motor racing team from his wheelchair when she officially opened the new home of Williams Grand Prix Engineering in Grove. And more than 100,000 was raised for the team’s official charity The Spinal Injuries Association, of which she is patron, at a private charity auction conducted by the TV presenter Chris Serel.

The Princess Royal unveiled a commemorative plaque in the race bay of the factory, watched by the Lord Lieutenant of Oxfordshire, Mr Hugo Brunner, and the High Sheriff, Mr Malcolm Cochrane. She also met the man behind he successful Formula One team, Mr Frank Williams, and representatives from the Spinal Injuries Association.

The team’s chief designer, Mr Adrian Newey, and technical director, Mr Patrick Head, were on hand to give the princess a private tour of the race bay, and took her behind the scenes in the factory.

A spokeswoman for Williams Grand Prix Engineering said: “I think the Princess Royal thoroughly enjoyed the trip round. It was an excellent day. She is such a natural with people, and whenever they are in her presence they seem to feel at ease. She wants to meet the real people and she certainly did that today.”

After Princess Anne left, sponsors, partners and members of the Williams team attended a lunch followed by a private auction of Williams memorabilia to raise money for the Spinal Injuries Association. 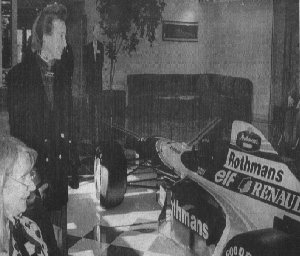