“The technical side makes it very interesting, as a lot of time and effort is being put in. Time will tell if the concept of having a world championship will work. It’s difficult for me to judge at the moment, if another manufacturer would be interested in the ITC. The next two years will tell. ”
Frank Williams, 1996

The International Touring Car championship was born out of the German DTM series bringing together three of Europe’s major car manufacturers, a level of motor racing technology beyond even Formula 1, and a 25-strong grid of ex-Grand Prix drivers and young would bes … 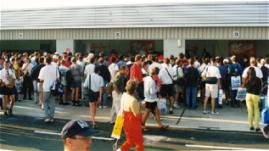 … and then just a suddenly as it started, with the talk of a FIA backed World championship, it collapsed.
At it’s height ITC was hugely popular and the stakes were high. In an effort to win the three manufacturers taking part, Mercedes, Alfa and Opel, stopped at nothing to achieve their goal.
In the case of Opel they turned to Williams Grand Prix Engineering who brought their skills to bear on the semi-automatic gearbox, power-steering and telemetry.
The Williams connection doesn’t end there either – one of the principal Opel teams in ITC was run by former Williams champion Keke Rosberg. 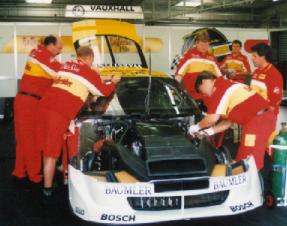 Inside the BTCC Factory