Ever wondered just how fast an F1 car really is compared to a Touring Car? David Coulthard in his FW17 took on Alain Menu in his BTCC Laguna for a lap of Silverstone.

Given a following wind, Coulthard was lapping in a whisker over one minute 25 seconds, more than 35 seconds faster than Menu. In the time it took Coulthard to complete one lap, Alain had reached Bridge.

At that pace it would take the F1 car around 90 minutes to complete the full 61-lap Grand Prix distance and the BTCC car just over two hours.

Surprisingly, on-board telemetry shows the kerb-hopping tin-top racer lost little to its full-blown F1 counterpart in the slower corners but on acceleration it was left for dead when the pedal was to the metal. The F1 car also displays remarkable braking power, losing 90mph in just 1.5 seconds on the approach to Stowe.

So far as top speeds go, the FW17 touched 187mph on the approach to Copse (it also exceeded 180mph on Hanger Straight and on the run up to Abbey). The BTTC Laguna broke 140mph right at the end of Hanger. To put it bluntly, there’s a sizeable gulf between an F1 car and it’s BTCC counterpart. 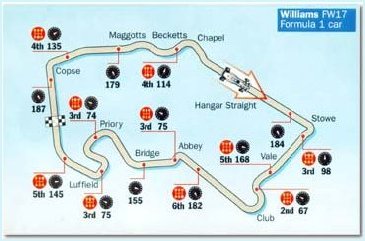 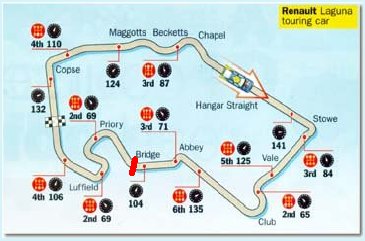