A lack of success for Williams has meant less exposure at the show than last year when they were champions. While the new car, the FW21, is not due to be launched until the end of January the team did have a car showing off some of the new sponsors. 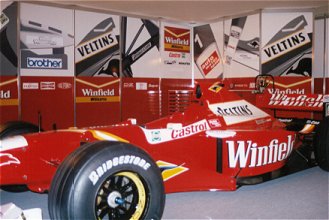 Nortel, the telecommunications giant, Brother who have jumped ship from the now defunct Tyrell and Petrobas, who have been the teams fuel supplier for the last couple of years and are having a sticker on the car for the first time.

There had been some suggestions that Winfield would not remain on the car for the 1999 season but the Rothmans brand are back and the only difference between the car at the show and that shown here is that the race car will have more white.