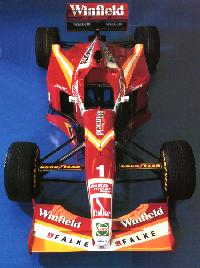 The team’s new colour scheme was launched today at the Pinewood Film studios and, as expected, it was red. The change is due to the change of sponsor from the Rothmans cigarette brand to Winfield, itself owned by Rothmans. A Williams spokesman explained: “This event was purely for the sponsors to use in their markets around the world. The car will run at Jerez next week before the launch of the new car at the end of the month.”. The car will also appear at this weekends Autosport International show in the UK.

There were reports however of friction between the two drivers, Heinz-Harald Frentzen and new world champion Jacques Villeneuve, when reporters asked the pair to shake hands.