Looking back, it wasn’t Clay Regazzoni’s victory which I remember as much as Alan Jones’s qualifying lap. Even now, I can still feel the roughness of the breeze block wall on which I was sitting on the inside of the Woodcote chicane when my new Tissot stopwatch clocked Jonesy at an unbelievable time. I looked to one side, and there was Cliff Allison – himself once a fine Formula One driver – literally shaking his own stop watch in disbelief.

That weekend in July 1979 is one which will stick in the memory of anyone who worked for Williams or who admired Frank Williams. He had been involved in Formula One for ten years (on the day, in fact, it was exactly ten years since Piers Courage had run Frank’s Brabham-Ford in its first GP) and as he himself admits, the win was long overdue.

The season had started with the Ligers dominant, and then Ferrari had started to look strong. But Frank, Patrick, Alan and the boys had done their homework during testing at Silverstone to perfection. Armed with a new design of aerodynamic undertray, wrapped around the V8 Ford DFV engine so snugly that even the water pumps had to be modified, the Williams FW07s were visibly quicker than the opposition.

Jabouille’s Renault ran in a strong second place for 16 laps, until its tyres were cooked by the effort of staying with Jonesy. From then on it was Jones and Clay Regazzoni, lying apparently unassailable in 1st and 2nd places… until Jones stormed into the pits with 30 laps to go. Some wretched subcontractor had not modified the water pump according to the factory specifications, and the water had leaked away through a crack. 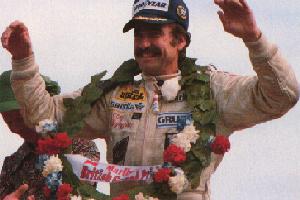 So Clay Regazzoni triumphed, coming in a good 24 seconds ahead of Arnoux’s Renault. A Swiss-Italian with a reputation for sometimes trying a little harder than he should, he was already the winner of four GP’s in an on-off career with Ferrari stretching back to 1970. It was a popular win, and there was plenty of sincere congratulations for him from the press and fans alike.

Frank, of course, was showered with greetings of an even more affectionate type. After years of doing everything wrong, he and his team, led on the technical side by Patrick Head, were now evidently doing things right, even if there had been a hiccough with the Jones car.

The emotional success was the start of something important. Watching it all was the Saudi prince whose sponsorship had helped to make it all possible. With the Saudis even more firmly behind him for 1980, Team Willy (Frank’s term!) was headed for greater things. But at the end of the year there would be no place for Clay Regazzoni.

In fact, Clay joined Team Ensign. It was while driving one of the British team’s cars at Long Beach in 1980 that he suffered the accident which has left him in a wheelchair. Like Frank, though, he is a regular visitor to the Formula One paddocks, these days giving his expert opinions on Italian language television.