If reputations won titles, Williams could confidently clear space in its trophy cabinet for a swag of silverware from the British Touring Car Championship. But the BTCC is no respecter of reputations and even mighty Williams, the World Champion of Formula 1 teams, has to learn how to be a winner in the touring car cauldron. Williams has already been humbled in the heat of BTCC battle. In the first four rounds of the series, its Renault Lagunas -the car to beat at the end of last season -were swamped by the pacesetting Volvos and Vauxhalls.

That the Williams-run Renaults weren’t front-runners on arrival may have surprised outsiders, but the team had no illusions about the difficulty of entering a new arena and taking on specialist tourer teams on their own turf. ‘We realise it’s no easy meat,’ says the man with his name on the front of the factory, Frank Williams. ‘We know what we have to do. We know it’s uphill – we don’t care what others think.’ Adds Williams touring car team boss Ian Harrison: ‘We’re not here to show everybody the way. We’re not here to say to all the other teams “Look, we do it better because we’re a Formula 1 team”. That’s rubbish.’

It was something of a scramble just to get the first two Williams-built Lagunas on to the grid for the first two rounds at Donington Park on April 2. ‘There were a few times when I really, honestly, thought we were going to have the smartest static display at the first meeting,’ Harrison recalls. ‘I really did think that sometimes.’ 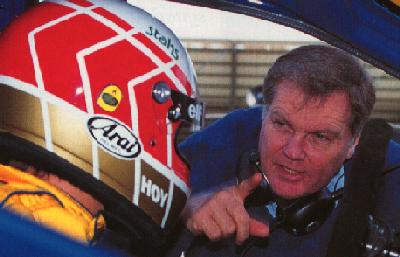 The reason for the rush was that the all-new team started from scratch last November. While the other top teams were pounding the test track trail over the winter, Williams was still building up its resources as well as new cars, allowing only limited development work with last year’s Lagunas fitted with wings.
Although the reliveried Renaults were immaculately presented, with an impressive attention to engineering detail, the lack of track time told. While in better shape than the rest, they couldn’t match the speed or consistency of the Volvos and Vauxhalls. Swiss stay-put Alain Menu, last year’s title runner-up, and 1991 champion Will Hoy, recruited from Toyota, were frustrated by the Laguna’s edgy, inconsistent handling.
‘But it will get better,’ Menu predicts. ‘I can feel that the car is basically good and has potential. We have a basic understeer problem in the slow stuff, but Williams has more brains [technical staff] than we did last year, so we should be able to sort it out. 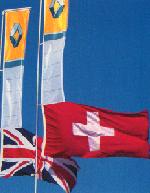 The Williams-Renault alliance is synonymous with success in F1 and extending it to world’s most hotly contested Super Touring title is a risk for both companies. Renault is risking the winning momentum it built up with the Laguna in the second half of last season and Williams risks eroding its reputation as a winning enterprise…

But both believe the added association is an investment in the future. For Williams, the opportunity to become involved in a fast-growing formula second only to F1 in international appeal was too good to miss.
‘Touring car racing has emerged over the past two years,’ Frank Williams observes. ‘It’s a burgeoning class with strong TV coverage, image and following. It sounds like an embryo Fl. It’ll never replace Fl, but it’ll get stronger and stronger. We have to be in there.’
The wheelchair-bound boss of one of the most successful F1 teams of the past decade-and-a-half – seven constructors’ and five drivers world titles – has taken a genuine interest in touring car racing.

He plans to he at all the BTCC meetings which don’t clash with F1 races, enjoying the contrast between the sheer intensity of Grand Prix racing and the informal professionalism of touring car competition.
‘It reminds me of when I raced touring cars in 196l/’62,’ Williams says. ‘I mean, the technology’ is centuries different, but the atmosphere is almost clubby compared with Fl. It’s friendly, there are no dividing lines. I enjoy it very’ much. ‘And I must say I’m rather proud to he involved. To have taken on another venture is a challenge for the company. There’s always the danger that we’re going to dilute our [F1] effort, but from my point of view, I believe we will become a stronger company, than if we just stuck to one thing.

‘I don’t think we’ll be over-extending ourselves. I believe you can handle it if you have a good management structure.’
To this end, Williams Touring Car Engineering was set up as a independent company with separate staff, very few of whom were ‘poached’ from the F1 team. In fact, apart from being able to tap into Williams Grand Prix Engineering’s technical resources, there is little crossover. 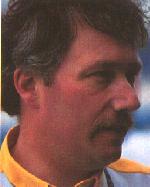 The touring car team operates out of its own factory a short drive from the main Williams complex at Didcot in Oxfordshire and the only familiar F1 faces are team director Harrison, formerly the Williams-Renault team manager, and technical manager John Russell, who was Damon Hill’s race engineer last year. The team manager is Dick Goodman, an old touring car hand fresh from helping Alfa Romeo sweep last year’s driver, manufacturer and team titles. Williams F1 technical director Patrick Head has a guiding role in the tin-top teams engineering activities, but no hands-on involvement.

Head freely admits that he is more interested in the commercial side of WTCE than exploring the arcane technical regulations of the Super Touring class.

‘If I were totally truthful, it’s more interesting to me as a business in terms of trying to get the car to perform and get the business to the level where it will be successful,’ he explains. ‘Super Touring is starting to become a worldwide thing and we’ll have, like BMW, the opportunity to supply cars over-seas. There is a small but growing market to supply cars overseas. We’re talking a maximum of 10 cars a year, but it’s part of the aim of the company to produce customer cars.

As well as strengthening Williams’ business base, Frank Williams had a selfish motive for taking on a tin-top team. ‘Frank’s a racer and I think half the attraction for him is that by doing this as well as Formula 1, he can go racing every’ weekend instead of only once a fortnight,’ Harrison says.

Williams puts it more bluntly: ‘I do eff-all at weekends when there are no Grands Prix. I literally hang around the factory, all day Saturday, all day Sunday-, annoying anybody who’s in, ringing up people who are trying to have a rest. I may as well go racing somewhere else. It’s the only thing I can do, anyway.’

When it was announced last September that Williams was taking over the running of Renault UK’s BTCC programme from the small MCT outfit, which developed the Laguna into a race-winner in the car’s first season, there were panicked predictions of a superteam fielding a supercar. But Harrison, who ran the Prodrive BMW team in the ’92 BTCC, has always dismissed the hype and kept warning that Williams wouldn’t just walk in and win.
‘In the early days, there was a lot of rubbish written and talked about by a lot of people who had experience in touring cars and should’ve known better,’ he says. ‘You know, they were saving that we were going to come in with a high-tech DTM-type car. Absolute rubbish!
‘The rules are written so that you can’t do that. And I’m quite pleased that some people have been quite disappointed by what they’ve seen. They’ve gone “Oh, yeah, that’s really nice” and walked off, thinking it was going to be a bit trickier than it is. But you can’t make it tricky. You have what you have. ‘And as I’ve said before, the teams who do this are pros. They’ve been doing it a long time and they’re very wily, some of them They know what to do, we don’t. Simple as that.’

Harrison believes that in some ways, top-level touring car racing is more difficult than Fl. ‘One of the biggest problems is that you don’t have the infrastructure, the back-up. At Williams Grand Prix, there are 250 people. We have 32, a lot of the time you’re relying on outside contractors. And some of them don’t know the difference between a day and a week. So you’re really working with one hand tied behind your back.

‘At Grands Prix, it’s not like that because everything is made in-house, you can control it. That’s been the biggest eye-opener for us. I mean, we’ve made a lot of mistakes, no question about that. The next build we do will be different.’

After the initial hurdles of setting up the new factory and hiring staff which involved sifting through a staggering 600 applications, the team had to build new cars in a time scale that was always going to be tight. But Harrison admits the Williams penchant for perfection made it too tight.
‘We had two cars from last year that we inherited, which were good cars. I mean, let’s be honest, the team which ran them last year did a good job. We looked at the car and thought there were one or two areas that we could improve.
‘But, as time went on, one part became two parts became three parts became four parts. And the whole thing just snowballed and expanded to the point where basically we redrew 80 per cent of the car, which was never the intention. If you knew what you were looking at, you’d notice our cars are a lot different from the MCT cars.
But still not different enough, according to Patrick Head. ‘We’ve made more than detail changes, but it’s still based on the original design. Progressively over the season it will become less familiar. It’s a good basic car, but not a front-runner yet. We still have much to learn to make it a front-runner.

‘The Volvos and Vauxhalls are quite strong. We don’t expect to compete at their level until improvements we have planned for later in the season are incorporated.’ 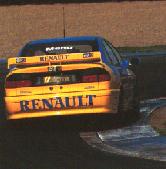 The team’s target for introducing its full ’95 specification is mid-season. Contrary to the belief in the pit-lane, though, Harrison says the update doesn’t involve building all new cars. ‘What we don’t want to do is to try to take on too much and just end up with an absolute shit-fight right the way through the season. I just won’t have that. So we have to consolidate with what we have.
‘If what we have can be made quick enough, then we have to review the time scale that we want to bring the new car in. And when I say the new car, it needs making clear that it will be these cars, only with a modification. These cars were built with this mod in mind so that we can do something later in the year. It’ll happen from one race to the next.’

And what of these persistent rumours that four times World Champion Alain Prost will make guest appearances with Williams in a third car later in the season? ‘Nothing is set in concrete,’ Frank Williams says, ‘Alain is employed by’ Renault and I know he’d love to drive a touring car. There might be the odd straw in the wind.’